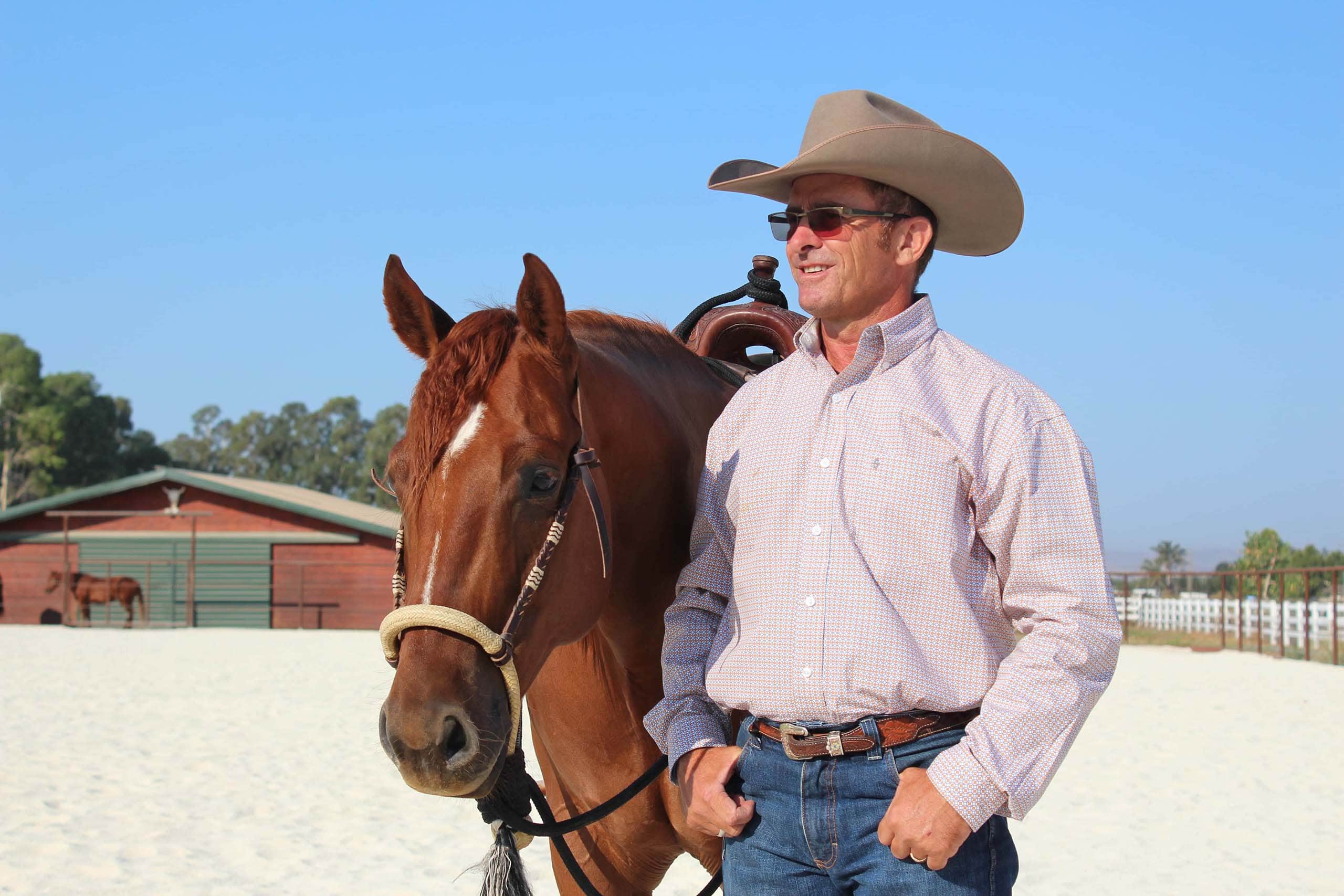 By Whiz N Tag Chex out of Peppys Smarty Socks

Bundy was born in 2012.  He is a quarter horse gelding. We have had him the longest. We bought him as a yearling with hopes of him being a reining horse. When he was 2 he kicked the round pen while acting fresh and fractured his P2 bone.

We were advised we had a 70% chance of him being OK so we went ahead and did the surgery, which involved screwing a plate across the crack in his P2, as well as fusing the P1/P2 joint.

He is the clown of the bunch. He is very active minded and very smart, which has in the past made it a bit of a challenge at times. During his first year of riding there were times I had get inventive teaching some basic body control, because he was so smart he would get ahead of you.  Whereas for the exercise to work well, he couldn’t anticipate.

He can also get frustrated quite easily. If you watched me ride him you wouldn’t think so, because I know how to not get in argument with him.

By Dun Gotta Gun out of Plenty of Rest

I purchased Petey for a client in 2011 and showed him for her for several years.  He was then sold to another client, Anna. He was in full time training, so I rode him for about 3 years. About a year after I stopped training horses, Anna was at our New Years Eve party in 2016.  Robyn asked about leasing Petey because there was a new rule that made leases legal in NRHA competition.  Anna wanted to think about it, but 3 days later called and said she had to sell him.  We said YES!

So that’s how we came to own Petey, and that year he and Robyn finished in the NRHA Top 10 for the year in 2 divisions.

In 2018 I showed Petey at World Equestrian Games qualifiers and at the actual games in Tryon – we marked 2 of our personal best scores while representing Australia! 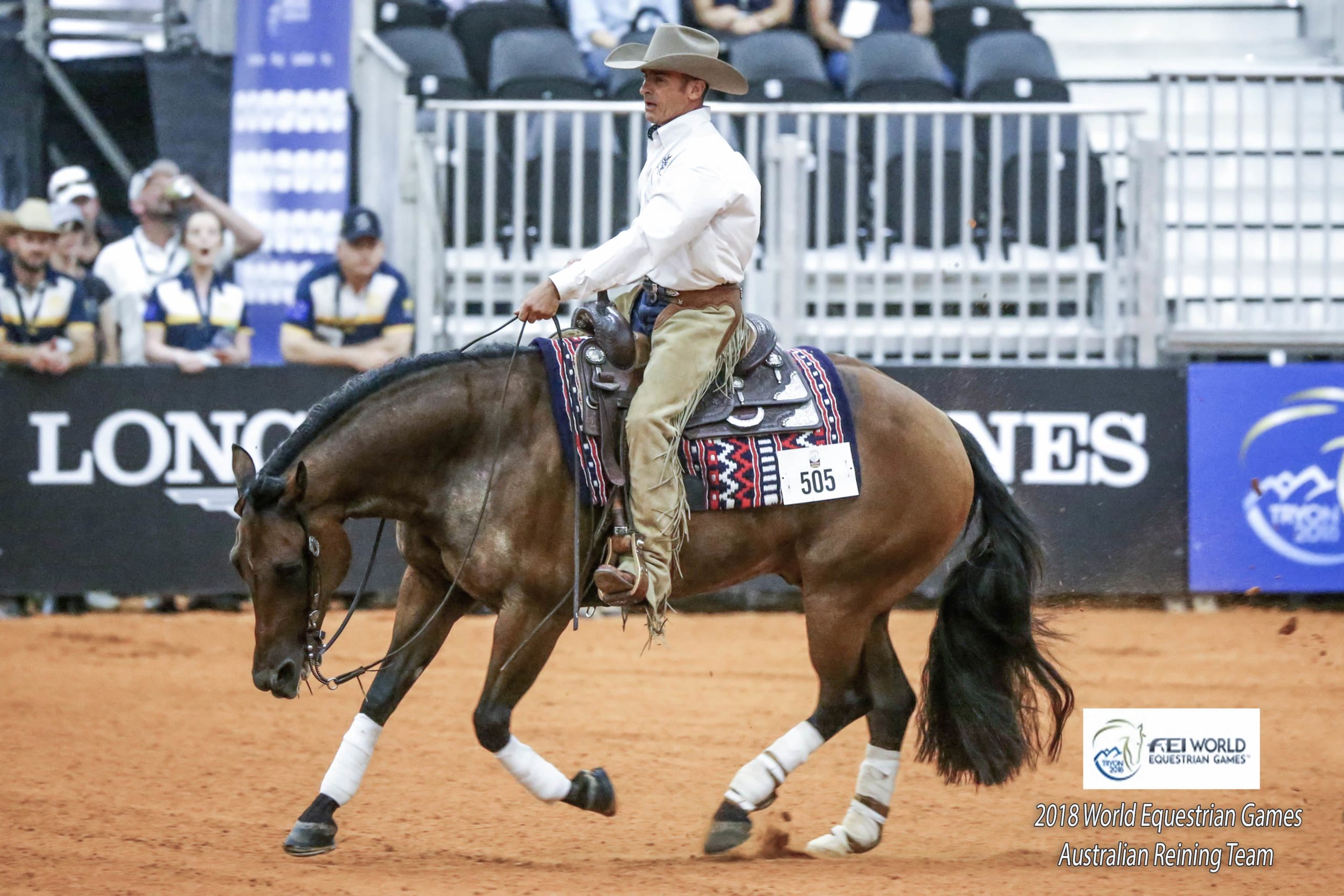 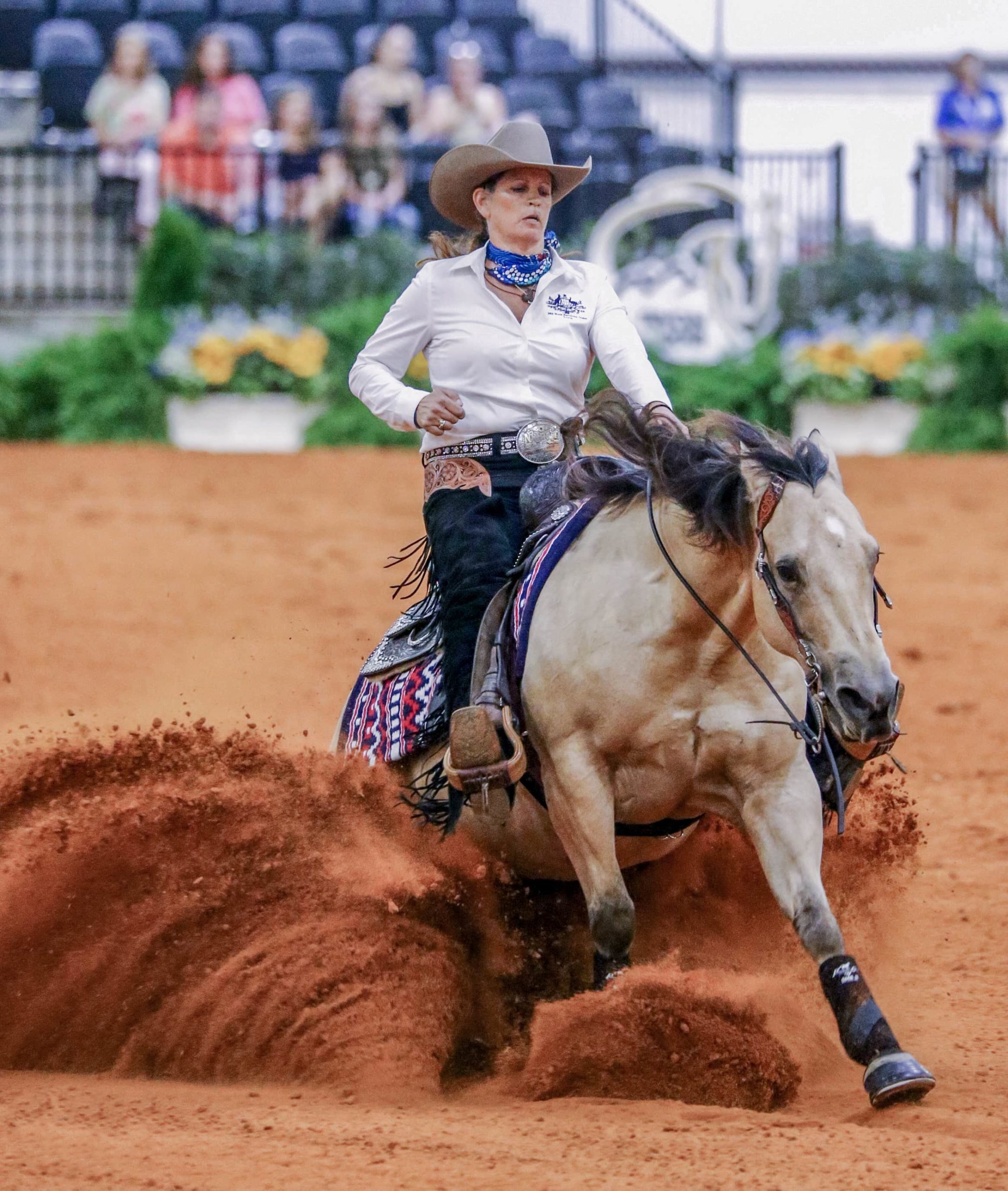 By Steady Tradition out of Bar S Doc Gay Bar

Oscar was purchased for our 2018 World Equestrian Games quest. He’s such a cool old dude, anyone can ride him.  He is the oldest of our herd, at 16.

Initially we thought we’d just ride him in the qualifiers for the WEG but Robyn ended up showing him there as well.  He was the oldest of all the reining horses there and the pair marked 2 of their personal best scores (218 & 220.5) for the Australian team, only 1/2 point out of making the individual finals.

Oscar is learning some new things now, like obstacles and liberty work.

By Commanders Nic out of CD Star

Sherlock came along at the right time, when I really thought I knew what I was doing. He showed me otherwise and has opened up a whole new way of looking at horses and our interactions with them.

He is a very shut down, hide his feeling type horse. I have gone back to the very beginning with him and I am slowly chipping away at him, from the inside out.

He has found his new leash in life being Chance’s buddy. 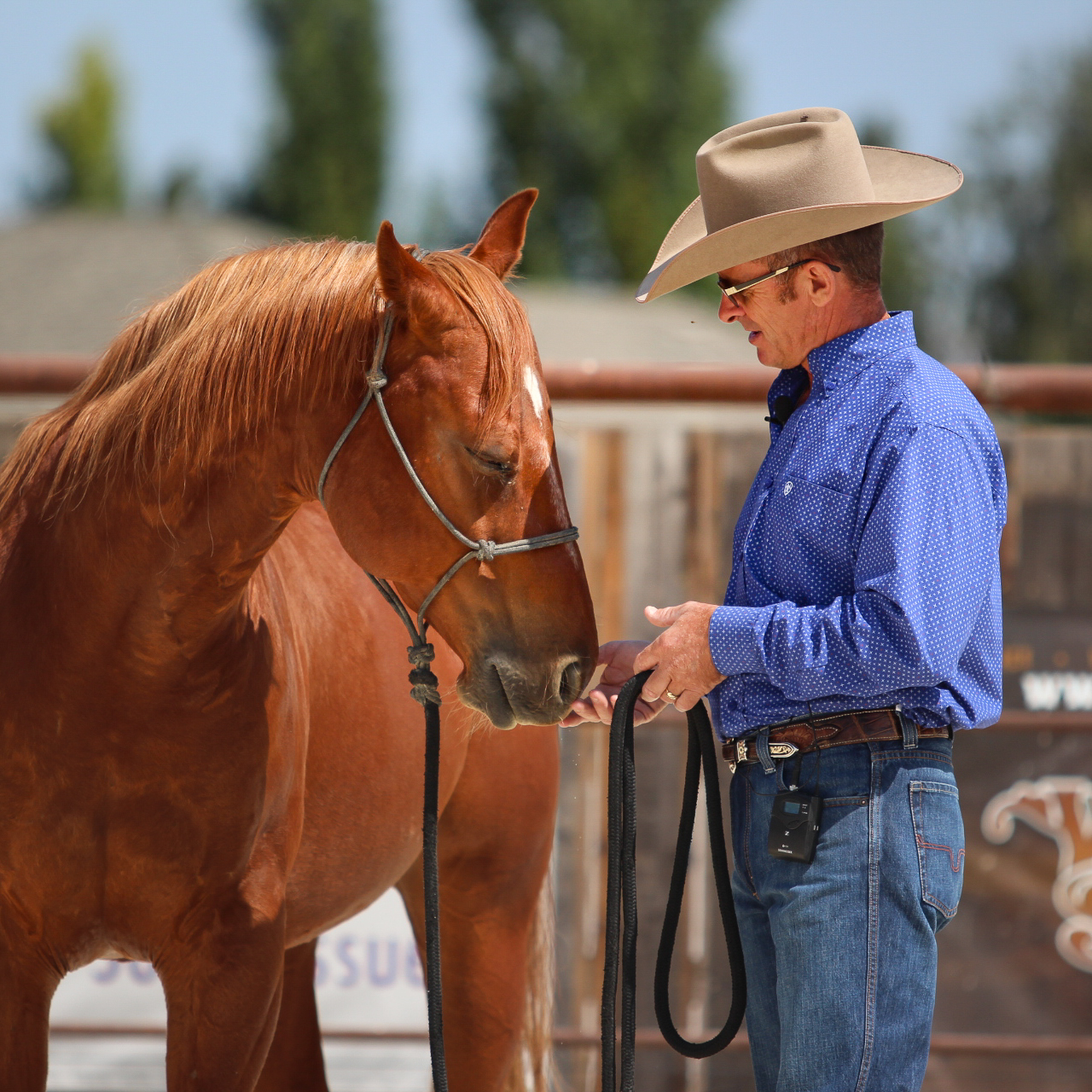 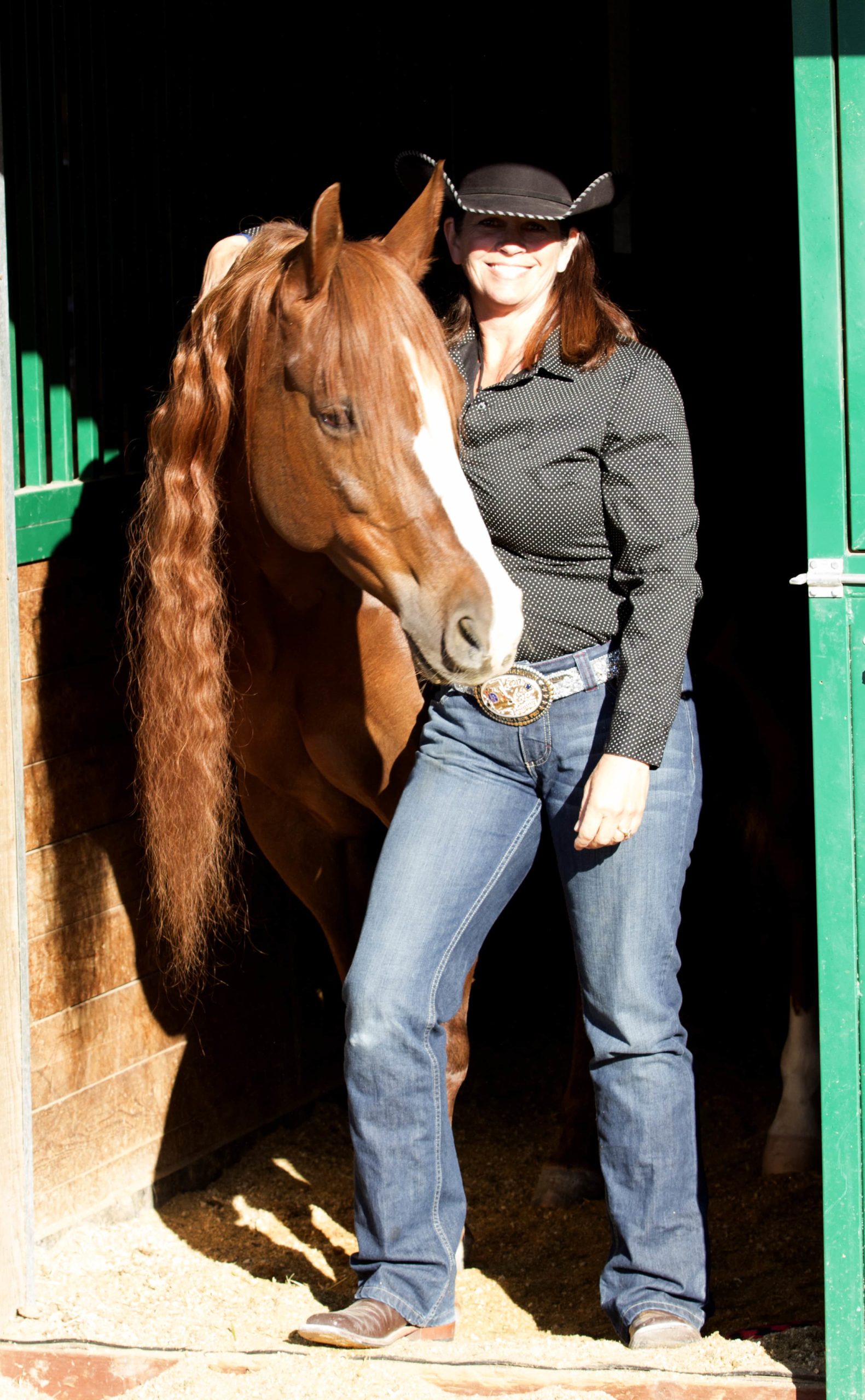 By Custom Crome out of Sir This Listosalady We had a palomino gelding named Tom that we traded for Bella. We call her Aunty Bella as Petey’s mother and she were half-sisters (they were both by Custom Crome). Robyn showed her in some of the 2018 FEI events then we bred her to Petey’s sire Dun Gotta Gun  (and the resulting offspring will be a ¾ sibling to Petey).  Bella is a beautiful chestnut mare with a huge stop. She has a yearling gelding named Chance and is in foal for a 2021 baby by Smart Spook.

By Dun Gotta Gun out of Lady Isabelle

Chance was born on May 24, 2019.  He is a 7/8 brother to Petey!  We are looking forward to our journey with this little guy. We have not done a lot with Chance, but what we have done is filmed and exists on our online video library.  He was gelded as a yearling and is already bigger than Sherlock. now the biggest horse on our place! 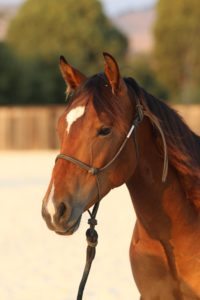 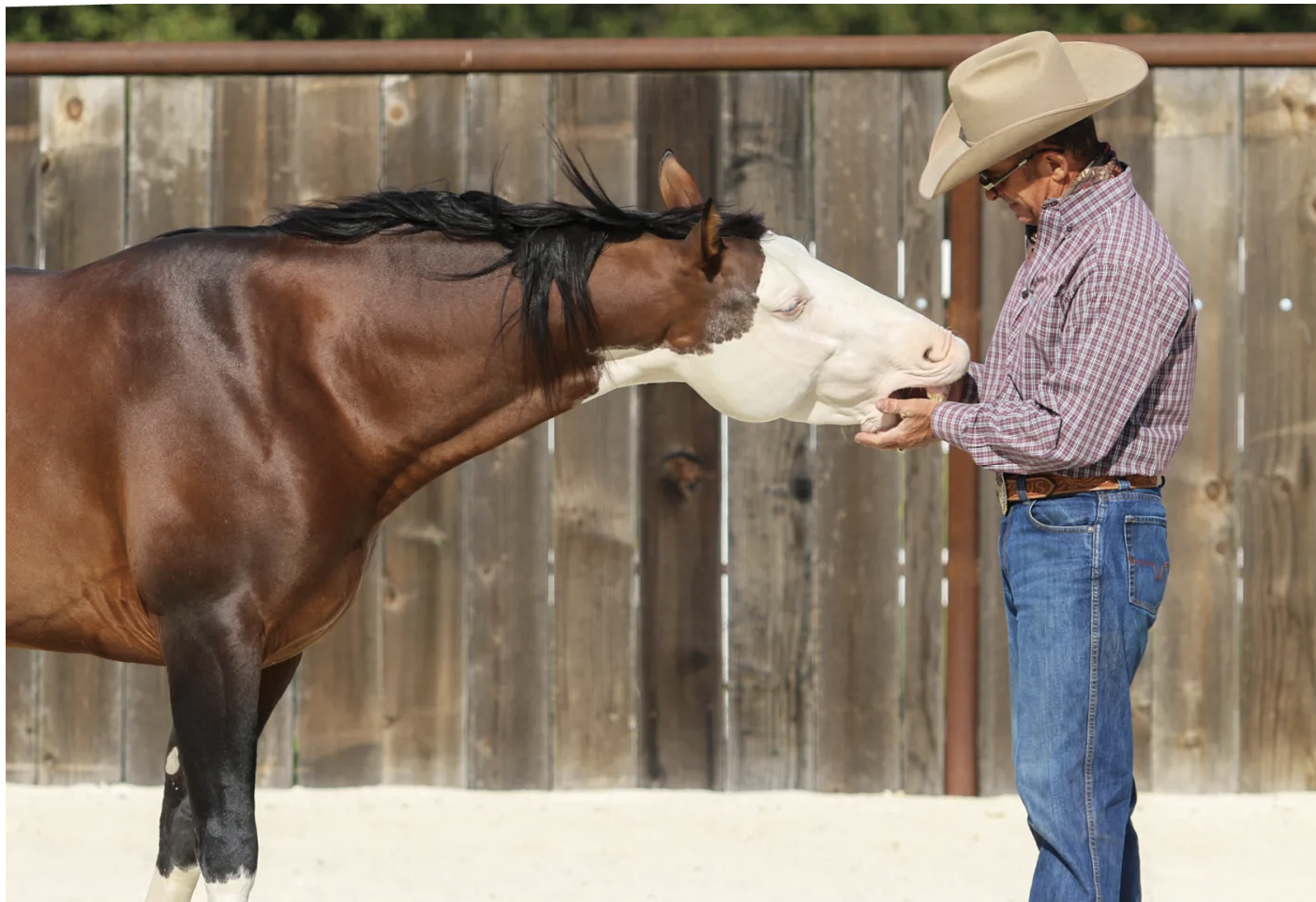 By Spooks Gotta Whiz out of Arbuckle Blonde

Rey was purchased by us as a high level reining stallion. While he was very talented, Rey was also very shut down. Peeling this onion has been a fun exploration. Rey is coming out of his shell and teaches us something new every day.

By Smart Spook out of Lady Isabelle

Rupert was born in March of 2021.  He is bred to be a very nice reining horse.  We will be videoing him along his path and see where it takes him. 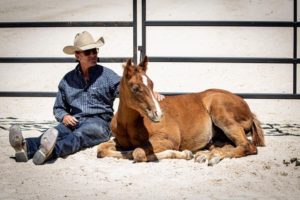 The Rest of the Herd

RINGER (Laser Sharp) By Marino Marini out of Sharp Blade Ringer is an Off The Track Thoroughbred turned jumping horse turned rescue horse. I got him from a horse rescue in Galt, California. My plan with him is to sort out his behavioral issues and then learn to jump on him.  He is now living in Canada. 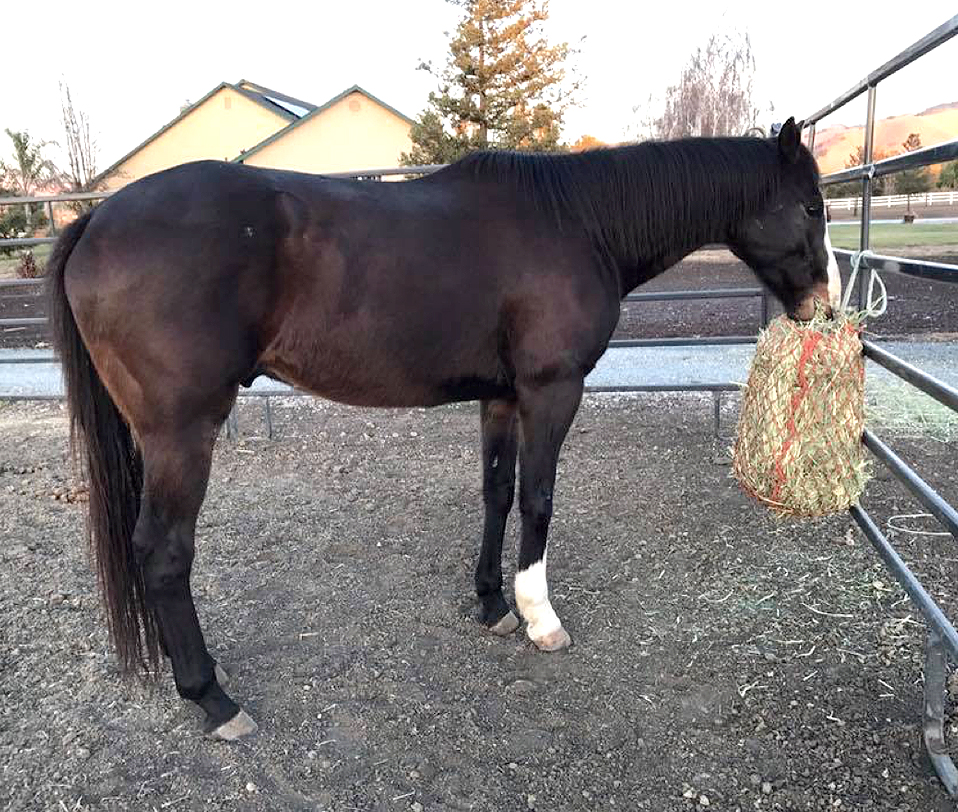 Ringer
ALBERT (Ima Smart Man) By Im Genuinely Smart out of Burgundy Rosebud We bought Albert as a yearling in Oklahoma. We had hoped to make a really good reiner of of him.  Even though we ended up showing him a little, his body grew in a way that made the reining hard to do physically. He is an old soul, has just the most wonderful vibe about him. Albert is on a lifetime loan to Victoria Conklin and family in Wyoming. He is enjoying having Victoria and family love him and all his Albertness. 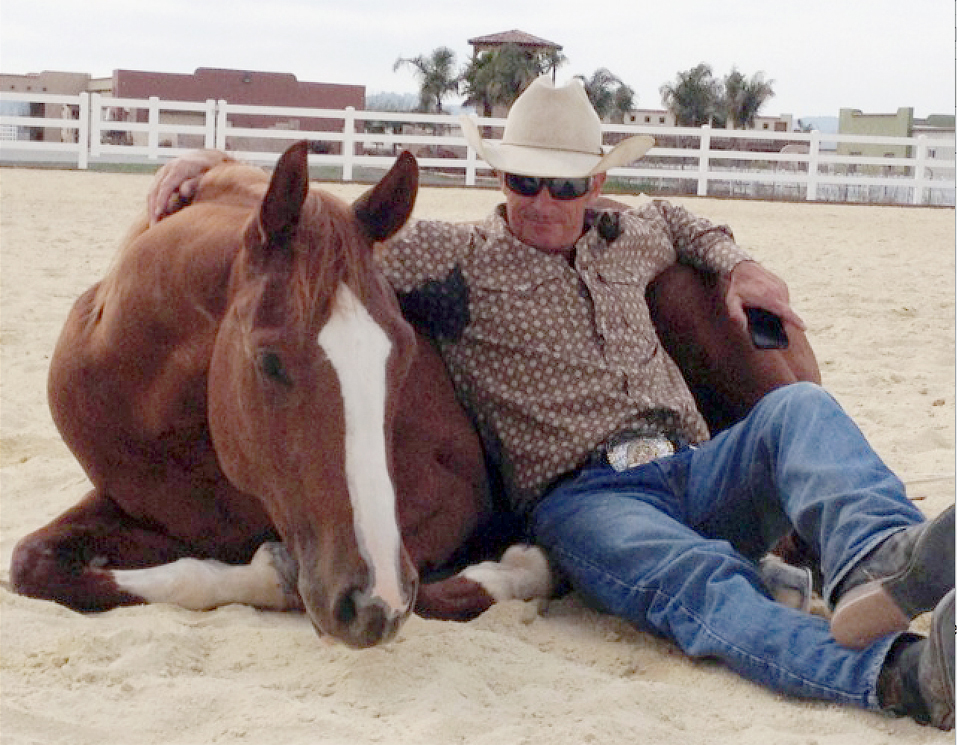 Albert
Murray (Red Metal Gun) By Spooks Gotta Gun out of  Smart Not Smoken We bought him as a long weanling. He arrived on a transporter at 3 am, and he was a tiny, furry little guy. Furry like a yak. When it came time to start him under saddle, we found out that he had a bad case of juvenile arthritis in his hocks.  It was a case of him not quite developing in utero.  He is sound now and we have gifted him to Bekah Tate who has taken him home to Texas. 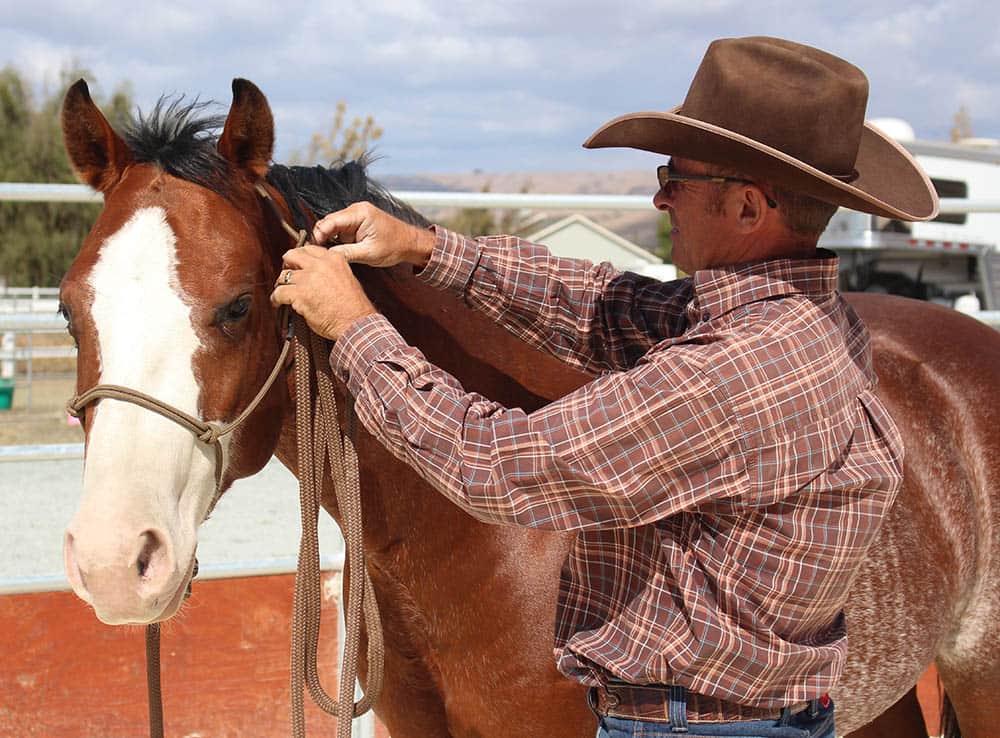 We and our partners use information collected through cookies and similar technologies to improve your experience on our site, analyse how you use it and for marketing purposes. Because we respect your right to privacy, you can choose not to allow some types of cookies. However, blocking some types of cookies may impact your experience of the site and the services we are able to offer. In some cases, data obtained from cookies is shared with third parties for analytics or marketing reasons. You can exercise your right to opt-out of that sharing at any time by disabling cookies.
Privacy Policy
Allow all

Always ON
These cookies and scripts are necessary for the website to function and cannot be switched off. Theyare usually only set in response to actions made by you which amount to a request for services, suchas setting your privacy preferences, logging in or filling in forms. You can set your browser to block oralert you about these cookies, but some parts of the site will not then work. These cookies do notstore any personally identifiable information.

These cookies and scripts may be set through our site by external video hosting services likeYouTube or Vimeo. They may be used to deliver video content on our website. It’s possible for the video provider to build a profile of your interests and show you relevant adverts on this or other websites. They do not store directly personal information, but are based on uniquely identifying your browser and internet device. If you do not allow these cookies or scripts it is possible that embedded video will not function as expected.

These cookies and scripts may be set through our site by our advertising partners. They may be used by those companies to build a profile of your interests and show you relevant adverts on other sites. They do not store directly personal information, but are based on uniquely identifying your browser and internet device. If you do not allow these cookies and scripts, you will experience less targeted advertising.

Facebook Advanced Matching can improve ads attribution and conversion tracking. It can help us reach better-targeted custom audiences through our ads. When possible, we will share with Facebook hashed information like your name, phone, email, or address.

Facebook Conversion API Events (CAPI) help us better understand how you interact with our websites. They allow us to measure the impact of our ads on the website's conversions and they improve ads targeting through custom audiences. When possible, we might share with Facebook information like name, email, phone, address.
Confirm my choices Allow all