This blog was written back in November, 2017

2017 was a year of epiphanies for Warwick and while he explains them to me, I really think that it has to happen for you, for yourself. It happened for me today.

I was working with Cooper, he’s Warwick’s new horse that he is going to show next year to get back in the show arena. Warwick is in Australia and he gave me the things he wanted me to work on with him. I had asked about the focus exercises and he said not to worry about them. He felt that way because Chuy (his former assistant) had this horse in training for the last 2 years and each time we had been around him, he thought he was fine about that.

Well, I picked him up about a week after Warwick left and it’s been about a week so far and he is a bit different. He was taken out of his routine, from his buddies and everything that had become safe to him. And he is not the chill dude we had encountered at Chuys. He is totally anxious. Totally buddy sour. And TOTALLY.LACKING.FOCUS!

I’d been trying to follow the instructions from Warwick, but today, there was just too much going on and I really thought that if I just jumped on – I could be in for a bit of a rodeo. Since I’m alone and most of the neighbors are working during the day, I decided that I was not up for a rodeo today (actually, I’m never up for a rodeo ride).

I had saddled him before I had made my rodeo assessment. So, when I brought him into the arena, I proceeded to do some of the focus exercises – against my instructions. I thought Boy, this horse is so distracted. He literally cannot look at me for a second. He will look EVERYWHERE BUT at me. I took some deep breaths and tried to push aside the frustration of that (because the expectation was that he wouldn’t need this work) and worked through the exercises. We made some progress and he had some good moments of relaxation. I could visibly see the anxiety dissipate, it was pretty cool. 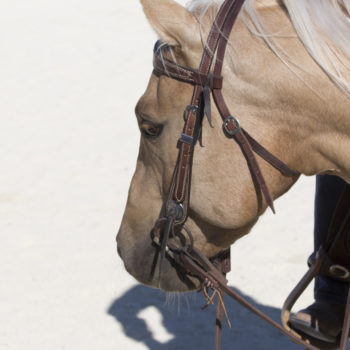 So, when he’d emptied out the rabbits that I was afraid of earlier, I got on and was thinking that I would then work on the things that Warwick had outlined for me, without the rodeo. I had just done the preliminary “where do you want to go” exercise and once again noticed his lack of focus. And this is when the epiphany hit me – what good is it to try to train on this horse if he cannot focus on me? He’s not THERE with me. Not really, not yet. We haven’t done enough of that work yet! He doesn’t have the skill built up yet. He doesn’t know me, he doesn’t trust me yet, I’m not his Lookout ZEBRA YET!!!

I’m sure you are not surprised by this. But I was! Why did I not already know this? I’d heard Warwick talking about it ALL.YEAR.LONG!

I wish I could explain to you what a relief it was for me to come to this realization. I thought, well, he needs to be exercised, so I can do that. I decided that I would not worry about anything but exercising him. I would try to keep the rabbits low with some walking in circles with my hand out to the side if he needed it (he totally does the windshield wiper eyes!) and then just exercise him without any expectation whatsoever!

As good as this felt, I also felt TERRIBLE. OMG! How many horses had I ridden and bumped on their mouth and kicked with my legs when they were in no mental state for it! Sherlock, for sure. Petey – probably. It is one of those moments that I cannot unsee!   I’m not sure how this is going to unfold, but I do know that until we work on the focus exercises with both of my new horses that the goal is very simply to keep them legged up.

The postscript to this blog will be next week after fast forwarding 6 months. Stay tuned.

5 thoughts on “Along for the ride: Focus Epiphany”