Robyn is the wife of horse (and people) trainer Warwick Schiller. She invites you to join her as she journeys through her life as trainer’s wife, mother, businesswoman and Internationally competitive rider.

We first got whisperings about a Million Dollar reining early this year (2019). In late February, I got a text from Dan James telling me about a $50k Invitational Freestyle that they were going to have in addition to the million dollar class in Las Vegas. All I had to do was submit a freestyle video! It turns out that my better freestyles were done when VHS was the way to record such things, so I didn’t really have a good recent one. I ended up sending a phone video of The Angry American (a song by Toby Keith) that I did at The Mane Event in Scottsdale in 2017. They let everyone know by June 1st who was chosen for that class – I was not one of them. But by then, they had also added a $50k Non Pro Championship to the event – all you had to do was show in a qualifying class and lucky for us, one of the qualifiers was right up the road from us in July – Reining By The Bay.

In order to qualify, you had to be in the top 5 in one of two non pro classes at that show. Once qualified, you could pick whichever horse you owned to show in Las Vegas. In other words, you didn’t have to show the horse you qualified on.

After Oscar hurt himself in March, we x-rayed and ultrasounded and couldn’t find anything. We changed his shoeing thinking it was a bone bruise so he had no sliders, he had wedges on his hinds. He was not really lame, just slightly off.

By June, he was much improved but still not 100% so we had a nuclear scan done at the beginning of June. The vet didn’t really find anything in the area of the injury – he reported that Oscar looked good for a 15 year old reining horse. Some heat in all the places you would expect – he suggested injecting his hocks and giving Tildren as maintenance, so we did that.

I had decided that my plan would be to show Petey and Dale at Reining By The Bay and try to qualify for the Run For A Million $50k Non Pro Championship. I would then get Oscar ready to be my horse for that class which was 3 weeks after Reining By The Bay (as long as he recovered to 100% and stayed that way). That would be 9 weeks after he had the suggested treatments. (I felt that Oscar was my best chance in that class after he showed me what he was capable of at WEG last year. I felt that Petey was capable of that too, but it would take more of a toll on him mentally then Oscar as Petey is far more sensitive of a horse than Oscar).

4 weeks post treatment Oscar looked good so I started riding him as well as Petey. This was the second week of July (he had been on our Eurocizer so he was not completely out of shape). I alternated between him and Petey each day, so they each got ridden every other day until the week before Reining By The Bay when they both needed to be ridden daily to ensure they would be fit enough for the stopping part of the patterns. Warwick rode Dale for me the entire time. As Oscar continued to feel great, I had decided that unless something happened, I would show all 3 of them in the qualifying classes and see if I could make it in the top 5 on one of them. Since there were 2 qualifying classes, I figured I had 6 chances – a lot more than most others!
This also would give me insight as to how Oscar would handle minimal preparation vs. the months of preparation he had last year.

Luckily for us, Reining by the Bay is the closest big reining show to us. It is a little over an hour’s drive. It is also held at one of the biggest outdoor arena venues and it just so happens to overlook the San Francisco Bay. You can actually see the chapel at Stanford University from the arena. We love showing there and I’ve had a pretty good track record there except the time I got vertigo at the show and couldn’t show (2016)!

Instead of keeping the horses in stalls all week at the show, we planned to fight traffic and drive back and forth from home going up on show days and hopefully once the week before. They would be setting up for the show, but we were able to get some time in the arena. We ended up going twice the week before.

We took Dale & Oscar on Tuesday and Dale & Petey on Thursday. The arenas were not busy at all, and they got to have a look around and feel the ground. I would show the following Tuesday and Thursday.

On the following Tuesday, when the class order was drawn, I was to show Dale before Petey and then Petey before Oscar. I had plenty of time in between Petey and Oscar, but not so much between Dale & Petey. Warwick prepared Dale for me and I warmed up Oscar quite early. I was sticking to his formula of ride early then just walk/jog around before going in his class. For Petey, I didn’t have as much time as I would have liked and I didn’t get him stopping very well in warm up. Everything else felt great. I’d never had 3 horses to show before, let alone in the same class. It was a little hectic.

When I showed Dale, he felt pretty good. He had been shown a bit last year by a big time open (professional trainer) rider, but in watching the show videos, he kept him very contained and rode with a lot of contact. This is not really my style and so by riding on a looser rein, there is a lot of margin for error. I had a couple of penalties and ended with a score of 70 on Dale.

Petey was as good as he’s ever been in his spins and circles, but I did not get him stopped very well. Another score of 70.

At this point, the day was not going as I’d visualized. I didn’t have any expectations for Dale, but I thought I could do well on Petey. I thought he was my qualifier since Oscar had not had that much preparation.

After jogging Oscar around a bit, I took him in and he was amazing. He was right there for me, only going as fast as I asked and the judge rewarded us with a top score of 73.5. That score held for the remainder of the class and we ended up winning over the entire qualifying class. We were qualified for Vegas! I decided that we did not need to show in the second qualifying class since I attained my goal. To do so would just add another hard run before Vegas, something he didn’t need.

I did want to keep riding Petey as well just in case something happened to Oscar. We decided to go back to the show on Sunday and “school” in another class. Schooling means that we enter a regular class, with the intention of staying close to the pattern but fixing things that need to be fixed without offending/disrespecting the judge’s time. We intend to receive a 0 score. To participate in this class on Sunday meant getting up at 5AM and driving to the venue, preparing the horses like they were to get shown and then fixing whatever I needed to in the arena. Both of them just needed to have a nice soft experience in the show pen, so that is what I did. 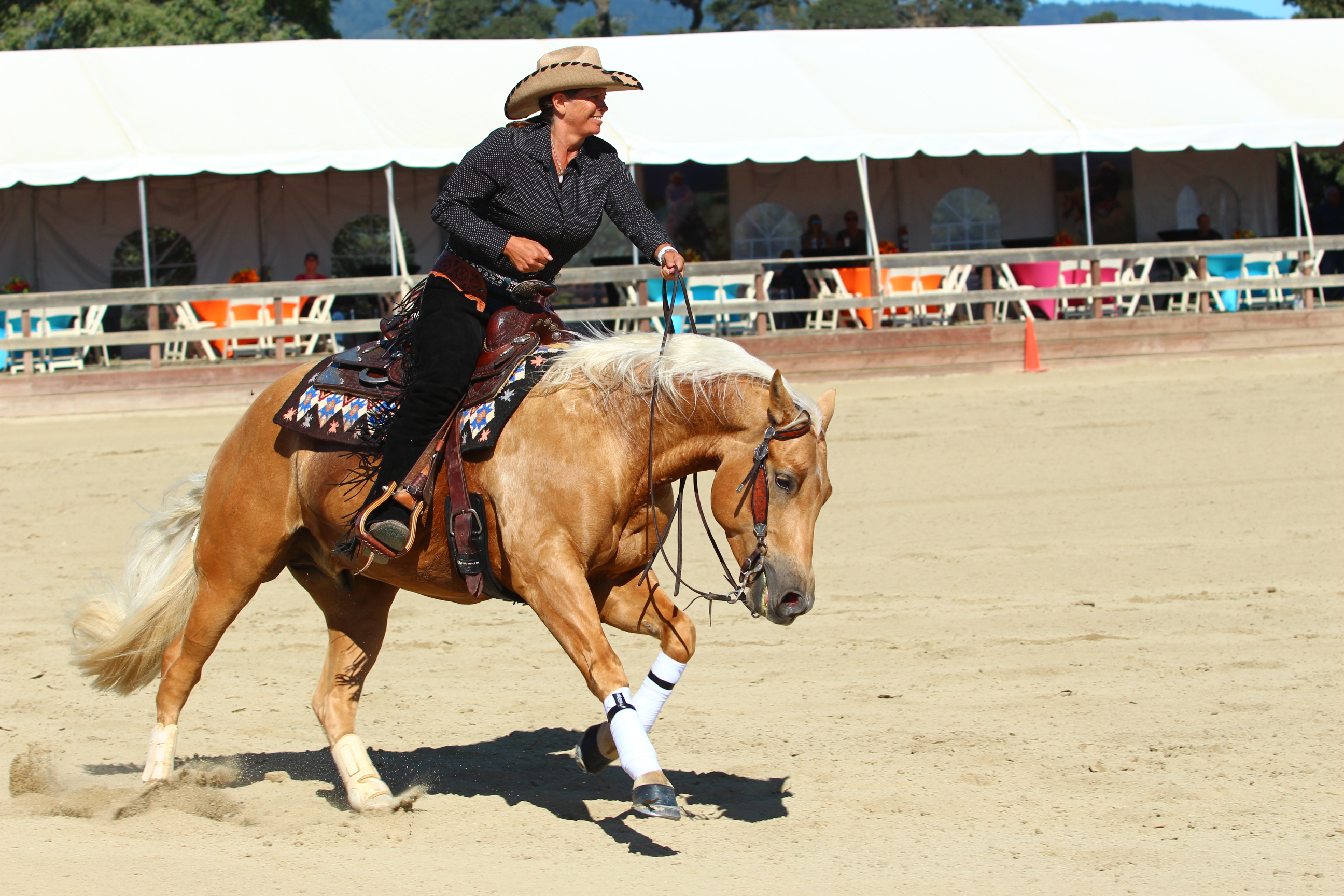